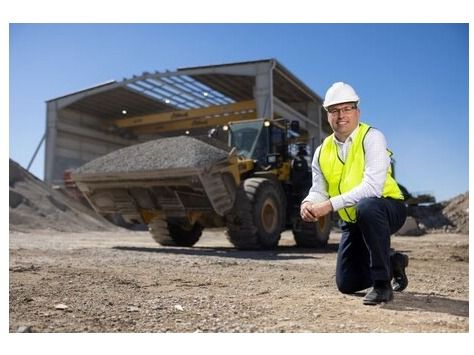 The $12.35 million road renovation in Brisbane was built on recycled concrete from Brisbane structures. Rino Recycling provided 96 percent of the recycled materials utilized in the Northshore improvements to Cedar Road and Macarthur Avenue.

Without subsidies, the cost of collecting and sorting recyclable garbage in Australia has historically been much higher than the cost of sending it to landfill. State governments have been adopting various methods to promote waste treatment and recycling since the 2009 National Waste Policy agreement amongst all Australian environment ministers. The waste levy supports the Queensland Waste Strategy, which aims to reduce landfill waste from 55 percent to 10% by 2050, with 75 percent recycling rates across all waste kinds. The Queensland government has pledged to reinvest more than 70% of the tax on garbage and recycling programs. The Queensland levy covers 38 of the 77 local government districts in Queensland, accounting for 90 percent of the population, with trash created inside the levy zones subject to the levy.

Queensland, according to Blaser, has very poor recycling recovery rates in comparison to the southern states, which have had landfill levies in place for much longer and hence have considerably more mature recycling industries. "There is a lot of space for growth, expansion, wise management, and investment, and Rino is taking the lead." "Rino recently received approval from the Department of Main Roads to supply recycled material for road construction," he stated.

"The recycling and resource recovery industry is becoming recognized as critical 'infrastructure,' and it will be critical to the future growth of the circular economy." It is our obligation to ensure that the environment's long-term viability and business safety are top priorities."

The project, which was managed by BMD on behalf of the Department of State Development, Infrastructure, Local Government and Planning, involved converting key roads in Northshore Hamilton from industrial access roads to thoroughfares that now serve the residential, retail, commercial, and recreational precinct. The project, according to Rino Recycling's General Manager Daniel Blaser, is a great example of how recycled material from all over the city can be used for significant projects rather than going to trash.

"The foundations of Brisbane's next chapter of development should undoubtedly be state-of-the-art recycling of commercial building materials into a wide range of base materials." This is the way development will go in the future, he claimed, by repurposing previously used materials.

"The story only improves when we reveal where the materials came from; knowing that certain roads have a history evokes a sense of nostalgia." Cedar Road, for example, has a foundation made of Mater Hospital concrete, as well as Ballymore and Bulimba Barracks stands. "The foundations of Brisbane's next chapter of development should undoubtedly be state-of-the-art recycling of commercial building materials into a wide range of base materials." This is the way development will go in the future, he claimed, by repurposing previously used materials.

Use waste as a resource