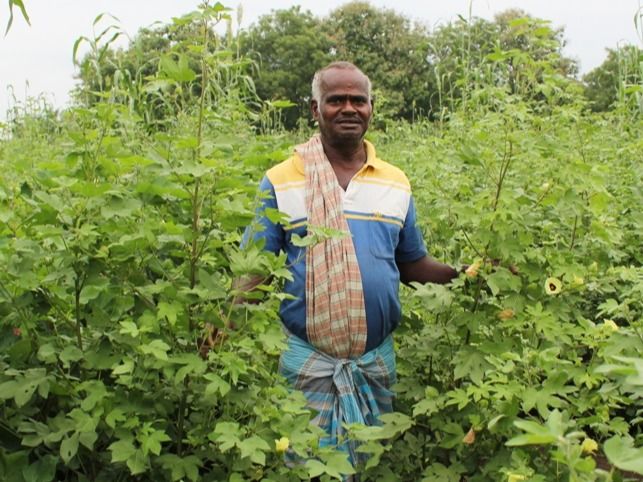 Introduction of BT(genetically modified) cotton in India resulted in 300,000 debt-ridden cotton farmers committing suicide in a decade as observed by The Indian Council of Agricultural Sciences, which administers farm science, and the Central Cotton Research Institute.

Tula identified this biggest problem of cotton cultivation in India and started working with local communities in the states of Tamil Nadu, Karnataka, and Maharashtra to identify the particular strains of indigenous cotton unique to each locality. The work of Tula is based on natural farming, Mahatma Gandhi’s teachings, and a movement to revive indigenous cotton. Tula works to revive all steps of the sustainable rain-fed agriculture supply chain where no pesticides and insecticides are needed. Indigenous cotton is traditionally a multi crop which makes it less water intensive.

India grows 21% of the world’s cotton crop, second only to China’s 29%. It is something to be proud of but at what cost. India has seen increasing number of farmer suicides in its cotton belt.

"Genetically modified cotton — introduced into India by Monsanto as “BT Cotton” in 2002 — within one decade became ~95% of India’s cotton production. Farmers are left with no choice but to switch to BT cotton and buy expensive seeds every year. To ensure good yield, enormous amount is spent on pesticides. Farmers are forced to take loans for their cotton farms. Usually, it leads to enormous debts when they are not able to produce the required yield because of uncertain water shortage and pests. Research has shown that farmers’ costs have increased significantly, while the prices they obtain for their cotton have decreased.

Beckert’s book The Empire of Cotton explores how the history of the global cotton market is the story of the making of modern-day capitalism, “The global South was to be a market for metropolitan industry, not a competitor, and a supplier of raw materials and labor, and both required the destruction of indigenous manufacturing. Colonial governments created systems of tariffs and excise duties that discriminated against indigenous producers.”

Tula team works to revive the indigenous strains of cotton species arboreum, and herbaceum (both are colloquially referred to as desi cotton, meaning local cotton). Cotton is remarkable due to its morphological plasticity, which enables it to adapt to local climates and geographies. Traditionally, villagers in present-day India, Pakistan, and Bangladesh grew desi cotton as a secondary crop alongside their primary food crops, maintaining their biodiversity and food security.

Arboreum and herbaceum are short-staple cottons that had over thousands of years, adapted to local microclimates in South Asia. They are, therefore, naturally very resistant to local pests and insects. The seeds are saved for next year’s crop, increasing farmers’ agency and financial independence. Local native varieties can grow without watering or irrigation. They thrive with only rainwater as their water source, a crucial consideration because one of the most frequent — but inaccurate — criticisms about cotton is that it requires extensive water resources. Water requirements are significantly reduced when we return to local, native species of cotton, which allow for rainfed farming. (Harpreet Singh for Fibershed)

The Tula Team has worked hard to find indigenous seeds after meeting many rural elderly farmers who had kept old seeds saved by their ancestors. They also found few seeds in local agricultural universities for research purposes. It’s taken several years to grow enough cotton to save enough seeds to distribute to enough farmers to be able to impact the number of livelihoods to which Tula aspires.

Tula’s partner farmers grow this cotton using traditional soil management techniques that restore and maintain soil fertility. They use homemade traditional fertilizers such as panchagavya and jeevamrit, which have been used for centuries in the Indian subcontinent. Panchagavya and jeevamrit are easily made by fermenting readily available ingredients, including cow dung (from native South Asian cow breeds), jaggery (unprocessed, unrefined traditional sugar), and in some recipes, neem and other local leaves. Panchagavya is used as both soil fertilizer and, when sprayed on plant foliage, pest repellent. Mulching is also a critical practice. In tropical climates, mulch provides added soil nutrition and retains soil moisture.

Desi cotton grows in a 7-8 month cycle, and farmers grow 8-9 other three-month crops in their fields alongside cotton, in the mixed crop methods used before British imperialism. The companion crops planted alongside desi cotton vary by geography: in Karnataka, cotton is grown alongside chili peppers; in Tamil Nadu, it is grown alongside corn, millet, coriander, and vegetables including onions, okra, tomato, and chili peppers; and in Maharashtra, it is grown alongside pulses (chickpea, pigeon pea, millets), flax, and vegetables (including okra, tomato). Once the farmers harvest the companion crops, they cut the stalks and lay them in the fields as mulch. (Harpreet Singh for Fibershed)

Tula farmers have seen dramatically improved livelihoods. They now have diversified their income sources. The majority of their income now comes from the lucrative food crops they grow alongside the cotton. Tula pays a premium over the market price of BT cotton — 50% more — to ensure that growing cotton is a financially viable activity for the farmers. Tula now purchases 200 quintals of cotton annually from 80-100 small-holding farmers, who own, on average, less than one acre each.

They named their effort Tula, a Sanskrit word with a dual meaning that reflects how cotton had been viewed for centuries: it means cotton and also means balance or equilibrium.

One of Tula’s founders, Ananthoo, says, “When you have direct relationships and build trust, certification isn’t necessary.” Organic certifications are expensive and would preclude the involvement of small-scale farmers.