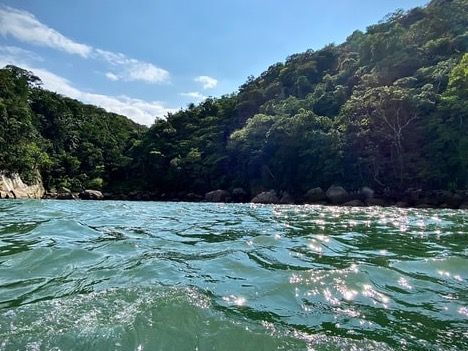 Brazil's capital city, Brasília, is no stranger to drought. After years of low rainfall, the situation reached crisis levels in 2016. To ensure that local water bodies remain able to naturally recharge, a diverse group of stakeholders collaborated to reforest springs in the northern urban watershed. These springs flow into Paranoá Lake, an important water source for the city.

Brazil’s populous capital city, Brasília, which is located on the dry Brazilian Highlands, faces dwindling water supplies, a growing population, and worsening dry periods related to climate change. Water scarcity in Brasília reached crisis levels in 2016, following three years of low rainfall. While the city had previously drawn water from local reservoirs, dwindling supplies forced it to tap nearby Paranoá Lake in 2017. With the Paranoá Lake now part of the city’s water supply, it became even more important to ensure its adequate water regeneration. A key source of water for the lake is outflow from the Serrinha do Paranoá watershed, an area of preserved savannah and natural springs to the north of Brasília. However, proposed housing developments threatened the Serrinha do Paranoá’s regenerative functions.

Protecting the ecosystems that help local water bodies recharge is key to maintaining a city’s water supply. For Brasília, that means protecting the Serrinha do Paranoá watershed. Working under the umbrella of the Serrinha do Paranoá Waters Project, a group of stakeholders that included academic and government institutions, civil society organizations, and community members implemented a set of initiatives including participatory mapping of water features, stream restoration, and establishment of conservation areas.

Volunteers mapped 115 springs and restored 25 degraded water features. As of 2019, one park has been created and four other conservation areas are in the final stages of official approval. A network of diverse stakeholders was built and strengthened through these efforts, and ongoing collaboration will ensure continuity and longevity of interventions going forward.

Photo by Lucas Sallum on Unsplash